Charming corners of the past

Six historical sites of towns and cities in As Rías Baixas that are worth a visit. Each has its own roots and distinct character, but they all have one thing in common: strolling through its cobbled streets will take you back in time as you discover perfectly preserved buildings, squares and monuments.

The Route of the Camellia

Baiona, Cambados, Combarro, Pontevedra, Tui and Vigo were declared Conjunto Histórico-Artístico (Historic and Artistic Site). If you only passed through these towns in your last visit, now it is time to explore them, with a map in your hands, and discover their streets and squares, their traditional and stately architecture, their churches and cathedrals, and their markets. In these towns, the vestiges of our past are combined with fine restaurants and leisure activities specially designed for travellers.

In the inland part of the province you have another must-visit, the medieval market of Agolada. It is recommended to stroll around its 70 pendellos, which used to be a meeting place for people coming from different parts of the province to buy livestock and other local products. Come and enjoy the charm of this historic legacy!

The historic centre almost has a round shape. You can enter the town through three entrances: the Santa Liberata Square, through the Padre Fernando Square or walking by the Cruceiro de A Trinidade (a stone cross honouring the Holy Trinity), located uptown, and being one of the few cruceiros under a baldachin that have been preserved in Galicia.

On the cobbled streets of Baiona you can see a large number of manor houses, such as the Pazo dos Correa, which today houses the town hall, and temples such as the thirteenth-century Santa María Collegiate Church, in a Romanesque Ogival style. The historic centre was declared Historic and Artistic Site in 1993. 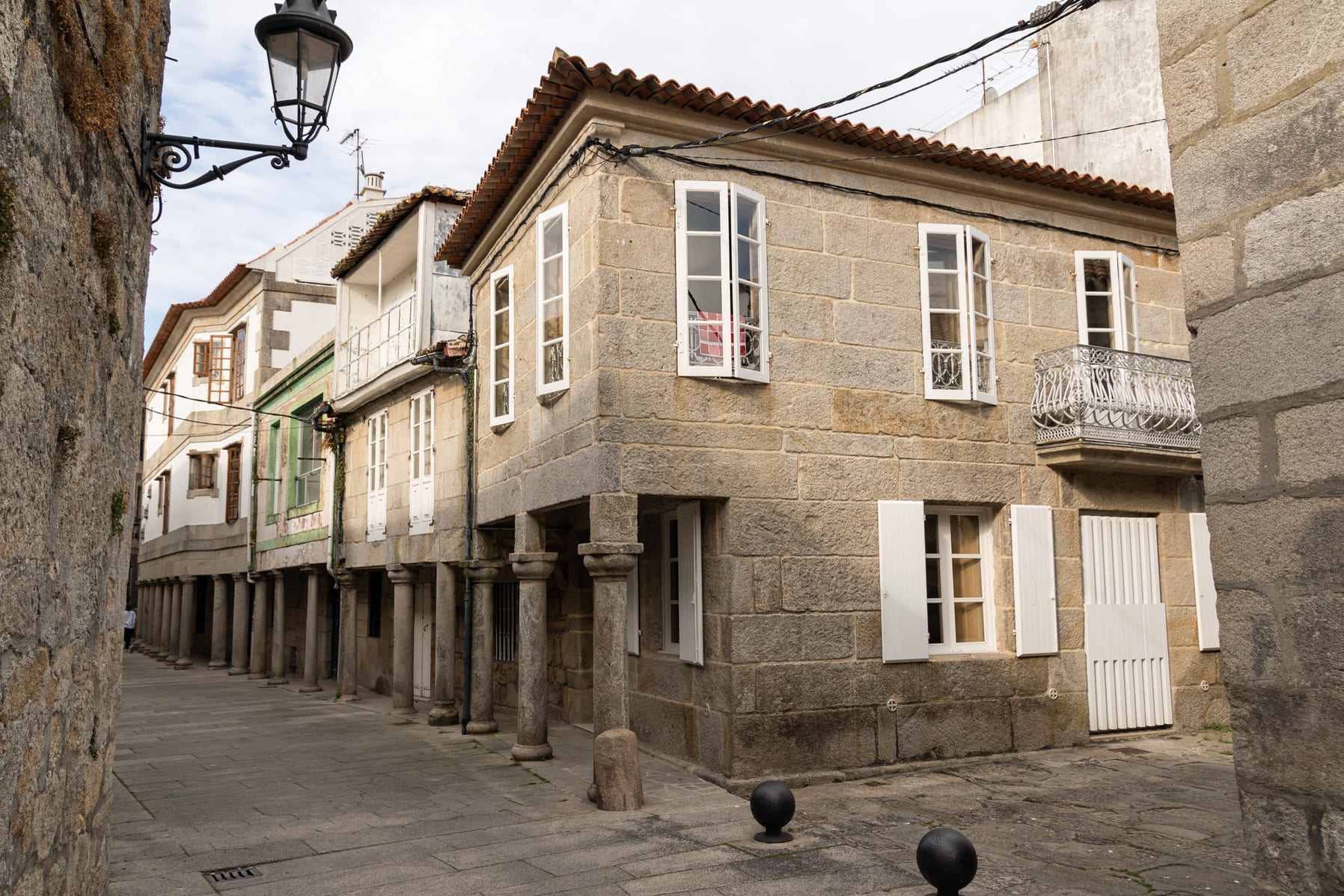 The tenth-century Fortress of Monterreal, located in a strategic position, on the Boi Hill, is a magnificent walled fortress surrounded by idyllic beaches. The castle was built in two periods: during the Middle Ages and in the Renaissance to the 18th century. It is famous for its three towers, known as O Príncipe (the prince), A Tenaza and O Reloxo (the clock). The castle houses the Parador Nacional (luxury hotel), but, if you buy a ticket, you can walk along the walls of the castle and visit its gardens.

The Museum of the caravel Pinta, a replica of the ship moored to a dock of the port of Baiona, reminds us of the fact that Baiona was the first port in Europe to learn about the Discovery of America. 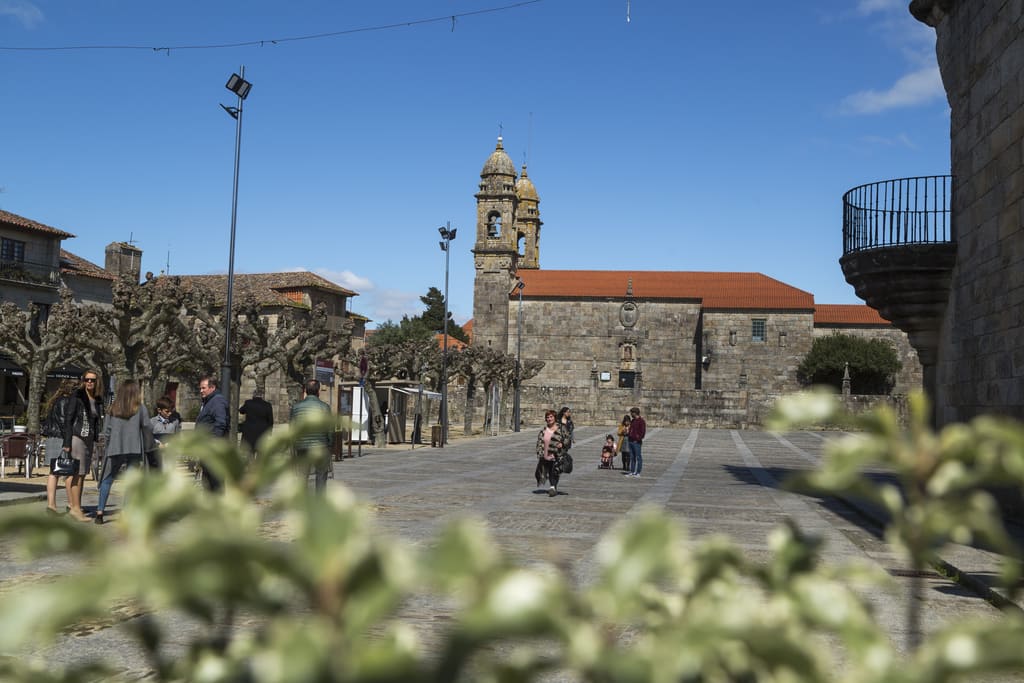 The most representative monument in Cambados is the Fefiñáns Square, which is part of a sixteenth-century architectural complex comprising the Pazo de Fefiñáns, the arched bridge, the watchtower and viewpoint, the keep, and the San Bieito Church. It is a beautiful cobbled square, which is the main attraction of the town.

Nearby, you can visit the Pazo de Bazán, which today houses the Parador Nacional and is surrounded by a beautiful garden. If we walk uptown, on the hillside of the Pastora Hill, by the cemetery of the parish, you can visit the remains of the Santa Mariña Dozo Church, which dates from the 16th century. It is an example of the so-called Marine Gothic style, it is roofless and you can visit the inside of the building to admire its peculiar arch sculptures, adorned with balls and reliefs depicting Biblical scenes.

This town has been always linked to the sea, as it can be appreciated in its typical houses, such as the House-Museum of Ramón Cabanillas and the houses in the San Tomé Quarter, whose streets end at the port. Nearby, you can discover the remains of the San Sadurniño Tower, a fortress from the Middle Ages built in an islet, which was destroyed during the Norman attacks. 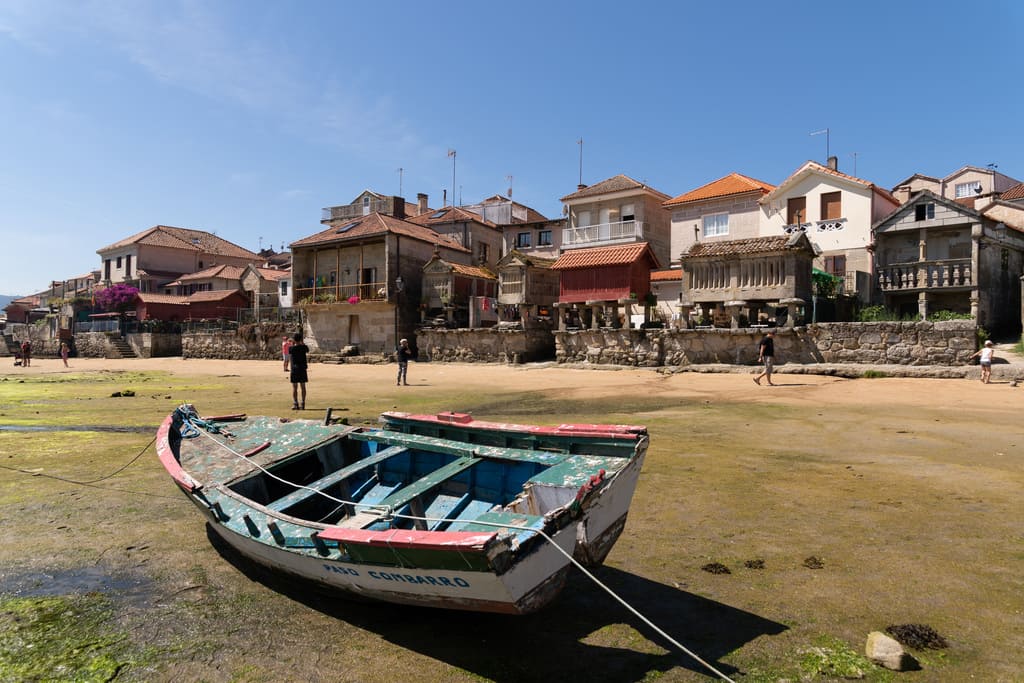 The parish of Combarro, located in the municipality of Poio, has been closely linked to the sea and it was declared Historic and Artistic Site in 1972. This perfectly preserved old town comprises an intricate network of cobbled streets dating from the 18th century that branch out from the streets of San Roque and A Rúa. You can also admire its small charming squares and humble seaside houses with delicate stonework, having balconies in a baroque style, modelled on the architecture of the pazos (Galician manor houses).

The most characteristic elements of the popular architecture are its more than twenty hórreos (Galician raised granary houses), one of the largest groups in Galicia, with the particularity that they are located by the sea. In this town, they are popularly known as palleiras, since in the past the granaries of this area used to have a thatched roof. The village also includes roadside crosses or cruceiros scattered all over the narrow streets.

Combarro can be discovered on foot, walking up and down stairs and wandering around its alleys, some of them leading to the sea. In addition, the town boasts a lot of restaurants and shops selling typical Galician products and souvenirs. 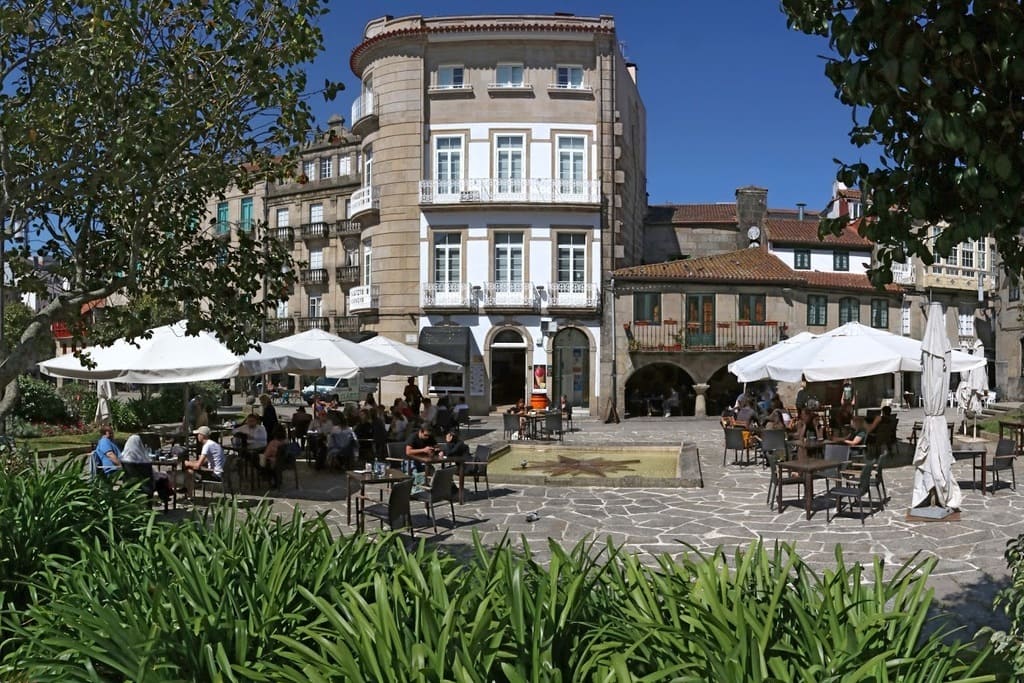 The historic centre of the town of Pontevedra is one of the best preserved in Spain and it was declared Site of Cultural Interest in 1951. Its charming arcaded streets lead to countless squares which keep the name of their former function: A Ferrería, the forge; A Verdura, the vegetable market; and A Leña, the timber market. In the latter, we can visit three of the buildings of the Museum of Pontevedra, one of the most important museums in Galicia devoted to archaeology, art and history.

Nearby, you can admire traditional and noble houses, as well as some remarkable churches. The Basilica of Santa María A Maior, whose construction began in the 15th century at the initiative of the Guild of Fishermen, is particularly interesting for its outstanding Plateresque façade. The Sanctuary of A Peregrina, featuring a floor plan in the shape of a scallop shell, is one of the must-stops not only for pilgrims on their way to Santiago de Compostela via the Portuguese route, but also for all travellers.

One of the most visited monuments in the town is the Ruins of San Domingos Church, displaying some archaeological exhibits. If you want to visit the building, you can book a free guided tour by contacting the Museum of Pontevedra from Tuesday to Sunday.

The historic centre is also the perfect place to taste some tapas, as here it is common to pair your drinks with an appetizer.

The town of Tui is a singular example of medieval town rich in monuments, and it is located on a rock hill by the Miño River. The Romanesque and Ogival Cathedral-Fortress of Santa María, which houses the Museum of the Cathedral, stands out. You can wander around the narrow arcaded alleys surrounding the cathedral and admire interesting buildings, such as the Convent of As Encerradas, the San Telmo Chapel (the only example of the Portuguese Barroque style in Galicia), the San Domigos Church and the San Francisco Convent.

Other cultural and tourist attractions are the twelfth-century wall, built as a defensive structure, and other elements that are part of the significant heritage linked to the Jewish presence in the region, such as the Casa de Salomón , the courtyard of the synagogue and some historic garments, such as the sambenito (tunic wore by penitents during the Spanish Inquisition). The international bridge over the Miño River , which is crossed by pilgrims on the Portuguese Way to Santiago de Compostela, is also worth mentioning. 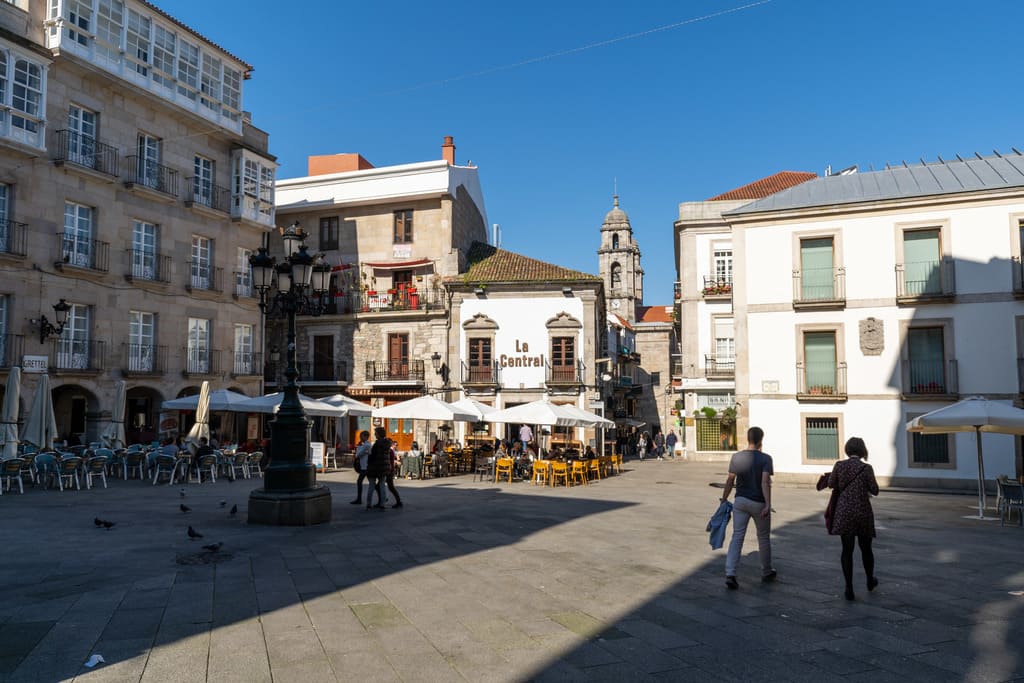 The Porta do Sol Square marks the zero mile of Vigo. Here, there is also a symbol of the city, the Sereo, a steel triton on a double column rising 13 metres high. This square is the best point to start a sightseeing tour of the city. From here, you can head to the old district or go to the ensanche, the urban expansion area, with examples of stately and eclectic architecture.

You can also enjoy a stroll down streets like Cesteiros, the Co-Cathedral of Santa María and the manor houses Pazo de Figueroa and Pazo Arines. From there, you can go to the neighbourhood of O Berbés, and admire its typical arcaded houses, evidence of a neighbourhood that was linked to the sea. Other must-visit is A Pedra Market, which is also a perfect place to taste some oysters.

In the ensanche, if you walk down the streets Príncipe, Urzáiz, Colón and Policarpo until reaching the gardens of the Areal Street, you can admire the architecture of the stately Vigo, such as the Bonín Building, designed by Jenaro de la Fuente, and the García Barbón Theatre. 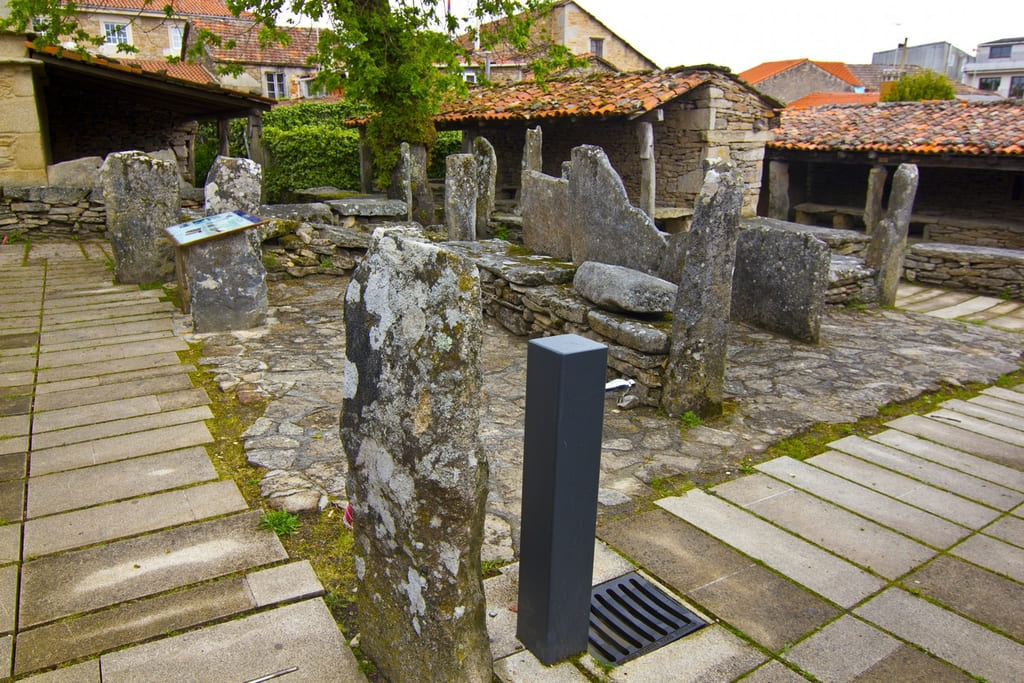 The town of Agolada preserves the original premises of an eighteenth-century traditional market. The original stone buildings, known as pendellos, are a kind of sheds, which were used as market stalls displaying the products of the traders. Many people coming from different places of the province used to gather in this market to buy cattle and other local products.

About 70 pendellos are preserved in the town, used in the past as sales stands, inns, dining areas or stables. They were functional constructions without any ornament, with a roof made of tiles and wood, and built using simple techniques. The pendellos were about to disappear in the seventies but they were reconstructed and, in 1985, they were declared a Historic and Artistic Site.

The visit to the old market is free of charge and you can freely walk along its narrow alleys. However, if you want to see the inside of the buildings you should contact the town council first, since visits are made by appointment only.